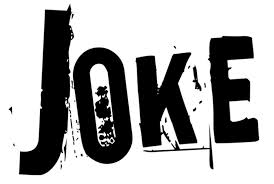 Because we’re good to you, here’s this month’s collection of reader jokes to make you chuckle.
Wine?
Religion: No
Drugs?
Religion: No
Masturbation?
Religion: No
I’m bored. Let’s go out and kill some people
Religion: Let’s roll!
Bill, Hamilton
Sex is like pizza. When it’s good, it’s great. And
when I’m drunk, I’ll pay for it.
Greg, Liverpool
Have you ever played GTA reality? I have – I’ve just
been mugged in Brixton.
Phil, Rockingham
My new girlfriend is taking me out shopping tonight.
She said I need new clothes as I look too middle
aged.
I’m gutted. I love my armour.
Flynn, Mackay
I bet my wife that if she fell into the Grand Canyon
she’d get stuck.
She didn’t get stuck but I still won.
Gordon, Cooktown
So today, while bathing with my one-year-old
daughter, I realised something; my infant daughter
has more interest in my penis now than my wife
does.
Still, a blowjob’s a blowjob.
Stan, Caloundra
I’m involved in the war on drugs. I’m on drug’s side.
Jeff, Penrith
I was given some financial good news today.
The child I’ve been sponsoring in Africa has been
mauled to death by a lion.
Clark, St Kilda
I believe a lot of conflict in the Wild West could have
been avoided completely if cowboy architects had
just made their towns big enough for everyone.
Zac, Castlemaine
Grab your taco, you’ve pulled a dyslexic Mexican.
Jim, Lonsdale
Stable relationships are for horses.
Dan, Ballarat
Barbie has an awful lot of nice mini skirts for a girl
whose knees don’t bend.
Steve, Portland
I really should start saying “congratulations” instead
of “are you keeping it?”
Ken, Torquay
I was out collecting money for a sponsored walk last
week… I collected so much that I got a taxi instead.
Chris, Wollongong
“Been drinking tonight sir?” The policeman asked.
“I had one earlier, but that was all,” I replied.
“I think you’ve had a few more than that sir. Would
you step out of the van please.”
“Why?” I asked.
“Because the Postman Pat ride isn’t really designed
for adults and there’s children waiting for their go.”
Josh, Gloucester
“Your son’s really quite gifted,” his P.E. teacher told
me.
“Gifted?” I replied. “But the lazy bastard doesn’t like
sports.”
“No, but he’s by far the biggest in the showers.”
Hank, Byron Bay
Miley Cyrus and Liam Hemsworth have officially
split as representatives confirm that their romance
is over.
I guess their relationship just wasn’t twerking.
Rob, Surry Hills
An African lady called Betty came into my restaurant
and asked “Is there any chicken on the menu?”
I replied “No black Betty, it’s ham or lamb.”
Ian, Dalby
The Apple iPhone 5c – named after the hourly pay
rate of its employees.
Tom, Clinton
I can’t remember when I first heard the phrase “One
up the bum, no harm done.”
But whoever said it owes me a new guinea pig.
Jonny, Elizabeth