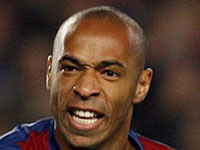 So who was at fault for Ireland not qualifying for the World Cup following THAT goal which we surely don’t need to explain to you?

Thierry Hand-ry for doing it? The referee for failing to spot it? The linesman for being a blind twat? Ireland themselves for not finishing France off when they had the chance?

Those fuckers FIFA are to blame – and not because of the ridiculous seeding system and the fact they would gladly shaft themselves up their own ass to see the big countries go through.

Unpopular though it may be to say it, teams like New Zealand and Honduras should not really be heading to South Africa when there are plenty of good sides in Europe who won’t be whipping boys by the time WC2010 comes around.

Yet the All Whites of NZ already had their pipe and slippers donned as Ireland fought like rabid leprechauns against the French in Paris, trailing 1-0 on aggregate from their defeat in Dublin earlier in the week.

And when Robbie Keane levelled things up, the sewers of gay París filled with excrement as a nation more used to waving a white flag than fighting, collectively shat themselves.

And so Ireland continued to fight, taking the game to extra time when, really, they’d had enough chances to finish off the French in 90 minutes.

Unfortunately, while they proved they could match their opponents on the football field, Ireland were found sadly lacking when the game switched to basketball rules near the end of the first period of extra time.

“I will be honest, it was a handball. But I’m not the ref. I played it, the ref allowed it. That’s a question you should ask him,” said Henry, rather twatishly.

Irish Boss Giovanni O’Trapattoni said: “All the European people saw we deserved to win or at least get to penalties. In my life it is the second time something like this has happened.

And the moral of this story? It’s New Zealand’s fault.