Simon Cowell‘s been hitting the headlines recently for his affair with Danii Minogue hitting the papers. Although the public were already fully aware that Simone Cowell was an arrogant arsehole, we thought we’d just firm up that popular assumption with a few of our favourite Simon Cowell jokes. Enjoy!
I auditioned for Britain’s Got Talent when it visited Cardiff. But, shockingly, I was turned down.
That’s right, my signature ‘balancing a Mars Bar on my head for ten minutes’ failed to impress Simon Cowell.
He said, “Sorry, but Osama Bin Laden’s had a Bounty on his head for eight years.” Harry, Bondi
There’s a new film called ‘Simon Cowell’.
It hasn’t come out yet. Louis, Bermondsey
I read that Simon Cowell is extremely wealthy and spends 500k on his personal security every year.
Wouldn’t it be a lot cheaper if he tried to be a little bit less of a cunt? Cheryl, Paddington
What happened when Simon Cowell took Viagra?
He grew taller. Terri, Kings Cross
Simon Cowell is more powerful than Jesus.
Sure, Jesus can turn water into wine, but Simon Cowell can turn shit into money. Sharon, Fremantle
I was being interviewed for a job at McDonald’s. “An obvious example is Simon Cowell,” I said. “His are approximately two inches below his nipples.”
Puzzled, the interviewer asked, “What on earth are you talking about?”
“You asked me to talk about high jean levels,” I replied. Matt, Gold Coast
I just read that Simon Cowell will only ever use Andrex.
Seems it’s a toilet paper so good even arseholes recommend it. Dan, Surry Hills 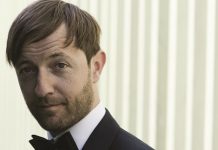