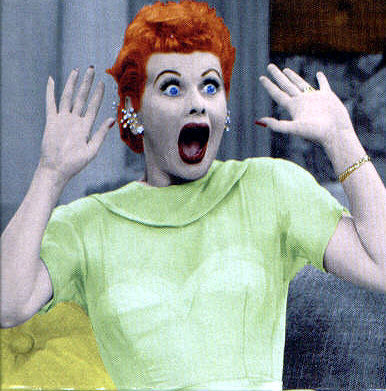 Fabio Capello resigns to concentrate fully on his commitments as one of the Dolmio puppets. Meg, Bondi

George Michael has sympathised with the captain of the stricken Italian liner saying…I’m often left abandoned and lying on my side with a badly damaged bottom and dead seamen inside me after a night’s cruising… Stuart, Surry Hills

The wife said to me last night, “Because it’s your birthday, if you turn the bedside lamp off, I’ll take it up the arse.”
2 Minutes later she’s screaming “Never again” and that I’m a sick bastard!
…Maybe I should’ve waited till the bulb had cooled down a bit. Peter, Paddington

If a woman is uncomfortable watching you wank. Do you think…a) you need more time together, b) she’s a prude. Or c) she should sit somewhere else on the bus. Brian, Fremantle

I had sex with a girl in an orchard. I came in cider. Chris, Manly

I was telling a girl in the pub about my uncanny ability to guess the day a woman was born just by feeling their breasts.
“Really?” she said. “Go on then… Try.”
After about 30 seconds of fondling she began to lose patience.
“Come on,” she demanded, “What day was I born on?”
“Yesterday?” I replied. Lois, St Kilda

Slept like a baby last night.
Woke up covered in shit and tears. Joe, Darlinghurst

I’ve always been told its not rape if you yell surprise first.
You can imagine the terror I felt as I walked into my first surprise party. Glen, Perth

A Priest & a Hindu meet for breakfast one morning.: Suddenly the Priest cries, “Look there’s the face of Jesus in the margarine on my toast”…….
The Hindu replies “I can’t believe it’s not Buddha”……… Josh Covent Garden